The mission of FIRST Team 1676, the Pascack Pi-oneers, combines the fundamental beliefs of FIRST with the desires of our team members to pursue and promote future careers in science, technology, engineering, arts and math (STEAM) and to provide STEAM education for our community. Our goal is to operate as a cohesive team, competing with Gracious Professionalism under the guise of FIRST and developing our students’ abilities to collaborate, create and develop as individuals and collectively as a team. We strive not only to build a successful robot, but also to master and exhibit the many life-skills necessary to succeed beyond FIRST Team 1676. 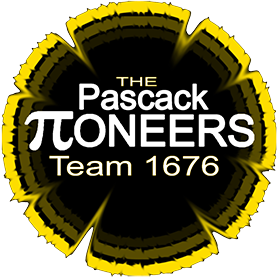 When founded in the 2004-2005 season, the Pi-oneers had 35 members. After 17 years of development, the team consists of 75 members, with 58% of leadership positions held by girls. A member of the Pi-oneers is a dedicated, hard-working individual; the average member spends about thirty-five hours a week working during build season. Although all members work tirelessly during the intense Build Season, they believe it is the “hardest fun” a student can have.

The Pascack Pi-oneers are supported by the community. The team owes much of their success to the coaches and mentors who work closely with the team throughout the course of the year. Teachers and staff in the schools, engineers from the community, business professionals, and parents all work hard to ensure that FIRST Team 1676 flourishes and thrives. The Pascack Pi-oneer Parents Association (Pi-Parents) contributes greatly to the team by organizing nightly dinners during Build Season, hosting the Kickoff Lunch, coordinate carpooling, selling team spiritwear, planning the Team Picnic, and keeping friends & family informed about team activities.

The name of the team, The Pascack Pi-oneers, was developed in the team’s first season when a game clue referenced the mathematical symbol “π”. Since the mascots of Pascack Hills and Pascack Valley were a Cowboy and an Indian, the team created the name “Pascack Pi-oneers”. Choosing the team colors proved a difficult task because the team did not want to show favoritism to either high school by choosing the colors of one of the schools. A freshman team member solved this problem by designing a logo using the colors yellow and black, two colors which are not associated with either school.

The Pi-oneers have come a long way since their successful start in 2004 and winning the Rookie All-Star Award in their first year. In 2009, when Mr. Paspalas was promoted to Vice Principal and Athletic Director, he credited his success to his opportunity to demonstrate leadership while mentoring Team 1676.